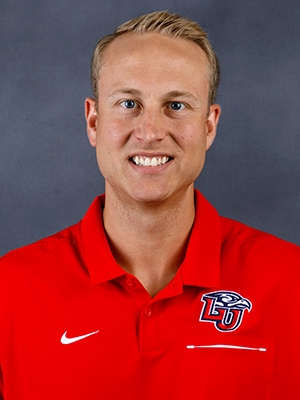 “I am thrilled to say that Brett Anema has been promoted to Associate Head Coach,” Johnson said. “He has been here since I first arrived on campus, having followed me from Texas A&M. We have improved little by little each year, and we look to improve this year as well. He understands the uniqueness of recruiting top-level student athletes to Liberty University. He shares the same vision with me about making this the greatest Christian volleyball experience in the country! Like me, he wants to win the ASUN yearly and make deep runs in the NCAA tournament. He relates extremely well with young people. He is very organized, and he is very professional in all aspects of his job. He wants to be the best assistant coach in the country. We are thrilled to have Brett on staff with us! Go Flames!”

Working with the middle blockers and blocking systems, Anema has helped the Lady Flames rank among the nation’s top blocking teams. Last year, Liberty ranked 24th in the nation with 2.61 blocks per set while setting a new program single-season record with 315.5 team blocks.

The 2019 Lady Flames posted their first 20-win season since 2014, going 21-12 overall. The Lady Flame also made their first postseason appearance since 2012, winning two matches in the Postseason NIVC and advancing to the quarterfinals. Liberty featured three players (Kailey Macy, Anna Gragg, Casey Goodwin) who posted 100 or more blocks on the season. Gragg set a program single-season record for hitting percentage (.378) while earning all-conference honors for the fourth time.

Anema, an accomplished player and coach, came to Liberty after spending the 2017 season serving as a volunteer assistant coach on Laurie Corbelli’s staff at Texas A&M. While there, he coached alongside current Liberty Head Coach Trevor Johnson, who was an assistant coach for the Aggies.