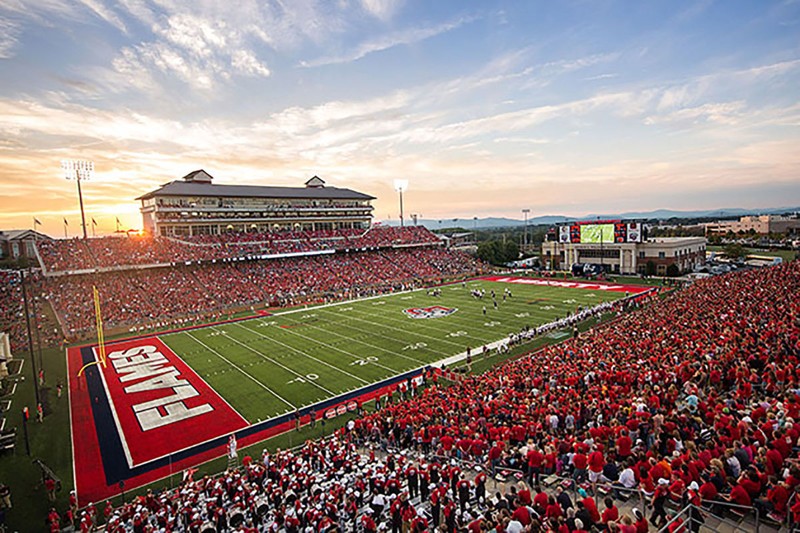 The expansion will add roughly 6,000 seats to the upper deck on the east side and 2,500 seats to the newly renovated berm to create a new seating capacity of 25,000 for the stadium.

Woolpert retained Odell Associates Inc. as the design architects for the stadium redevelopment, which will include a new concourse level, restrooms, concessions, a press box, a videoboard, utility rooms, camera platforms, perimeter road improvements and a new southern gateway entrance. That entrance will feature a large entry plaza and a curved brick, arched colonnade.

Woolpert is using gaming software to enable the university to visualize options for design updates and make informed decisions on the proposed $30 million project.

“The software illustrates how a design change impacts sightlines and circulation, which are two crucial aspects of stadium design,” said Steve Hughes, architecture team leader for Woolpert. “The 360-degree panoramas allow the university to see what the views would be like from various seat locations and private boxes, and these have been continually updated per the current design.”

The software animations let the university judge the widths of the concourse and plazas to give officials a sense of realistically moving through the space. They also simulate stadium lighting for the proposed light pole locations.

“The university, engineers and construction manager have been able to collaborate through the internet in real time, walking together through the virtual building and annotating issues,” Hughes said. “This software resembles a video game and makes the design process accessible to everyone. It’s a process that also can be done in virtual reality.”

Liberty is the largest private, nonprofit university in the U.S. and has an enrollment of more than 110,000.

The stadium expansion is scheduled to be completed by the start of the 2019 football season, when Liberty becomes a full-fledged FBS program.

“This project will produce a timeless, state-of-the-art facility that supports the school’s mission, purpose, achievement and growth strategies,” said Andrew Pack, Woolpert’s Education and Athletics practice leader. “It’s great for our team to work with this university as it strives for excellence as an elite NCAA Division I athletic program.”

Published in General and Sports