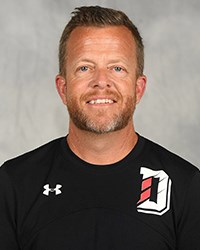 Findley has been a head coach at Mars Hill, Butler and N.C. State. He served as associate head coach at Davidson this past season.